There are certain recipes that you need in your back pocket for when you need to “wow” but you don’t have a lot of time. Or maybe you have time, but you want something straight-forward enough that you don’t have to worry about whether or not it will turn out.

This one fits the bill. Whether it’s for company, a special someone, or a regular old Thursday night, this recipe won’t let you down.

This takes just 20 minutes to prepare but has a rich decadent sauce that feels like it took much longer. The slightly sweet taste of the sun-dried tomatoes, joined with the earthy spinach and luscious cream sauce are a killer combination.

You start by sauteing the onions and garlic until they are fragrant. The shrimp and rosemary are then added and as they cook they begin to turn pink. I added the rosemary at this step so that the flavor could begin to bloom, but not burn because there is enough in the pan.

Once the shrimp are about halfway to pink, the spinach and cream are added. A quick stir is given and the freshly grated parmesan seals the deal! Make sure you use fresh here, it makes a world of difference in the flavor and the way it melts. Some recipes you can get away with the one that comes in a green shaker, but I wouldn’t test it here. The ingredient list is simple, and everything plays an important role so it’s best to go with quality.

Serve this on a bed of fettuccine or linguine. I like a long noodle here, something about twirling the noodles with your fork just cements the fact that this tastes like it could come from a fancy Italian restaurant! 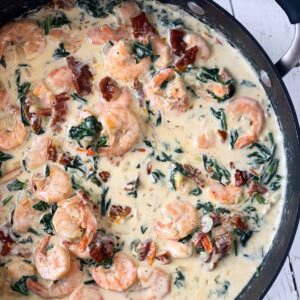