Ever since Michael and I saw the movie Chef we have been itching to make our own homemade Cubano sandwich. If you have seen the movie, you know the exact scene I am talking about.

Carl Casper (John Favreau) is in his food truck with his sous chef, Martin, and son, Percy. Martin makes a pork shoulder. There’s laughter and goading.  And then they take it a step further and make cubans.

I am being intentionally sparse with my words because I don’t want to give any spoilers. But even more so, I could not do justice to the way this movie is filmed. Throughout the movie you feel like you’re in the kitchen with the characters. Every slice of the knife, clang of the oven, sizzle in the pan is so vivid and inviting.

If you haven’t seen the movie, I suggest you pick it up at your local library. It’s heart-warming and fun. Just make sure you have something to eat-- it will make you hungry!

As far as making the sandwich goes-- the ingredients don’t vary much from chef to chef. A traditional Cuban is known for its bread, pork, ham, pickles, swiss cheese, and mustard (in my opinion lots of mustard). And an ever important step-- coating the sandwich in butter before pressing it.

We lucked out and had pulled pork shoulder already in the fridge that had been very well prepared by a friend. Tyler Florence has a great recipe if you need one! 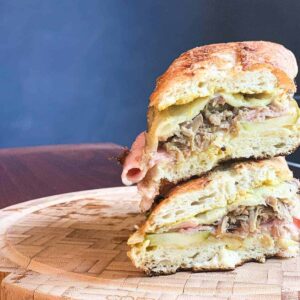 Depending on the size of your skillet/bread, you have have to cut the sandwich in half before pressing it.
Keyword Cuban, French Bread, Sandwich